The Best Nonfiction For Beginning And Reluctant Readers 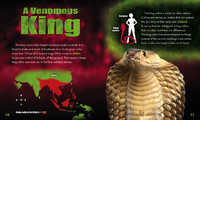 From the Series Nature's Deadliest

There is an animal in Asia with enough venom in its bite to kill 20 people! It is the king cobra—a snake that lifts its body off the ground, spreads its hood, and hisses violently before attacking. The king cobra has killed many people. Those that have survived attacks are lucky. Read a survival story and learn how to avoid attacks in this thrilling book.